God spoke to me through a squirrel.

We were coming home from a birthday lunch date with my daddy, and in the middle of the street there was a squirrel. He was pitiful. He was confused and dazed and didn’t know where to go. He’d head one way then circle around another way – going nowhere just spinning. He’d get dizzy so he would lay down his head and then twitch his tail and fight to stand up only to be dazed and confused again. It was one of the saddest things I’d ever witnessed. I wanted to cry, and I told my dad we had to help him. I was desperate to see him be safe!

We went to my house, and I grabbed an old dog kennel. I figured maybe he we could lure him in and release him into a tree. Yes. I wasn’t thinking clearly. After all, my college roommate and I had played momma to a baby squirrel for a few weeks, in my right mind I would have remembered how dangerous a scared and trapped squirrel could be, but all I could think about was the danger it was in, my own didn’t matter.

My dad and I walked over to where we had seen the squirrel, but in just those five short minutes it had taken to get him some help, he’d moved. We weren’t content with that we wanted to know where, so we walked a little and saw a tail twitch at the base of a tree. It was our little squirrel! He was slowly but surely making his way up the tree, to safety. I saw my compassionate dad getting choked up and wrapped my arms around him! My dad leaned his head to mine and said, “I’m glad he made it home.”

God spoke to me later that day. He said “That desperation, that heartache that you felt for that simple squirrel is but a fraction of what I feel as I watch my misguided children spin about dazed and confused with no where to turn. I need you to point them to safety. I need you to make sure they find the tree, the cross, and I’ll Take it from there. Just point them to Me.”

And that’s what we do. Everyday, in a million different ways.. Whether its through Teen Christian Ministries, LeadHer Academy, or writing books, We point to the cross. We are desperate at times! We want to grab them and force them into safety, not wanting to see them face the pain or heartache we have, and we forget that we can’t save them. That’s the hardest truth. We can’t save them. But He can! Only, they have to choose to fight, to shake off the confusion, and find their way to safety. But they have to walk it.. We can’t place them there.

I was pondering this very heartbreak after sharing my squirrel story with my friend, brother and writing cohort, when I was reminded of one of Jesus’ own moments of pain and desperation:

When he looked out over the crowds, his heart broke. So confused and aimless they were, like sheep with no shepherd. “What a huge harvest!” he said to his disciples. “How few workers! On your knees and pray for harvest hands!” (Matthew 9:36, 37, 38 MSG)

His heart broke! He saw their confusion and their aimlessness and His heart broke. The one that could save them stood amongst them, but what did He say? He turned to the disciples and basically said, “You see that? They need YOU to help them.”

That’s my same hope and inspiration! I can only do so much. I only see so many squirrels..err.. People.. But WE see many.. And if we are willing He would point out so many more! His heart is breaking still at their aimless confusion and desperation, and He addresses us, as He addressed me last week, “I need you to point them to me.. And I’ll take it from there.” 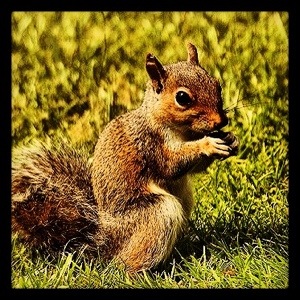